The new True Friend Challenge went live this morning - it's all about our pets friends, and of course Martha's best friend can only be Lola (and vice versa!)
My page is using mostly American Crafts - lots of it from last months Studio Calico kit. 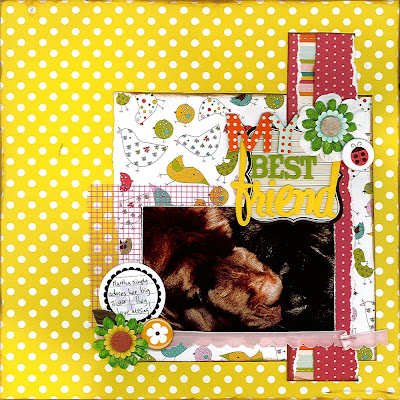 Talking of friends I've got a few pictures to share from the last few days - the first of which is the two girlies having a cuddle! The weather held over the weekend and it was great to get out and about (the rain has arrived with a vengance now though!) in the New Forest

Martha made friends with one of the cows in the Forest... But not these ones... don't fancy those horns close up! Much safer was this lovely textured bark I came across while having a wander... Found this camera this evening, lurking at the back of a drawer. It's an old APS film camera and I suspect it has a half used roll inside it, but it's impossible to tell as the battery is dead. So I punted a quid or so on ebay for a new one and if it works I'll be trotting down the developers to investigate some lost prints I think I last used it in about 1997/8 so it'll be interesting to see... I also found an empty film that might be worth a go if it all goes smoothly! I seem to remember the prints were pretty good from it so fingers crossed!
Posted by Katy at 22:49

Love your page! So bright and cheerful!

They are so beautiful together, you can just see pure frienship and loyalty. I don't fancy those horns much either.. WOWzers!

Definitely get the film developed asap I can just imagine the scrapbooking opportunities hidden away inside that film...Eek!! x

great picture of Martha and Lola! They're cute! Love the colours of your layout!