Here's my page from the inspired by the AL Calendar from yesterday. I love this pic of Martha, but it was a pretty dodgy shot of her taken with my wide angle, so to get her anywhere near filling the frame i was rather close, and as it was very early on a very dark and dreary morning it's a bit blurry and rather noisy! But not to be deterred, i've photoshopped it to within an inch of it's life to get an 'arty' (hahaha) effect and I've scrapbooked it anyway. 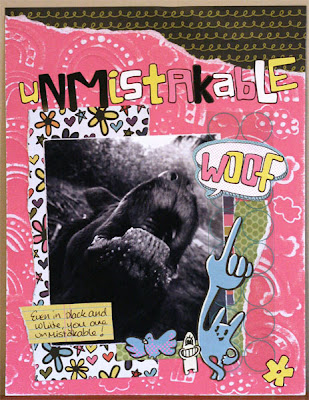 I've used some Love Elsie -Zoe as well as some Hambly and Bam Pop.

Back later with my picture of the day!
Posted by Katy at 16:57