So this isn't my news, but it's still pretty exciting!! I'm on the Bam Pop gallery!! It's my LO of Martha munching on her ice-cream! (It's further down on here!) Hurrah! I so love Bam Pop so i'm thrilled to be there! 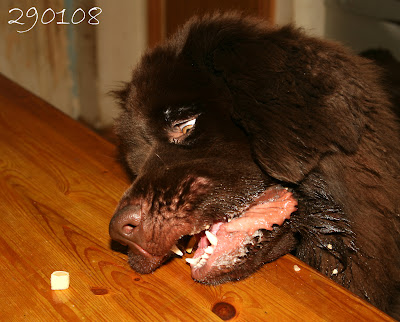 People (who haven't met my girls in person) are always asking just how big they are.... well this is Martha who can easily each the middle of the (rather tall) kitchen table! She's a right skinny bean still but after weighing her on Friday she weighs 62.2kg (that's 137lbs in old money!) and she's only just hit 13 months. That's just a little bit less than Lola, even taking into account her slight spread after her resting from her ops and shes at least 3 inches taller! What a great beast!
Posted by Katy at 20:26

What a beautiful girl...

Also wanted to say you've been tagged!!! You need to read my blog to find out the rules.. lol..

Have fun, and I'm looking forward to seeing your answers!!!
Love Jo

She maybe big... but shes goooorrrrrgggggeeeooouuuusssss

Bruno is in slaver love! Ok so hes a bit of an older man for her at nearly 30 months